↓
News
Quinn has completed his American Championship!!!  He is now known as
Am CH, U-CH Gazebo’s Irish Legend. 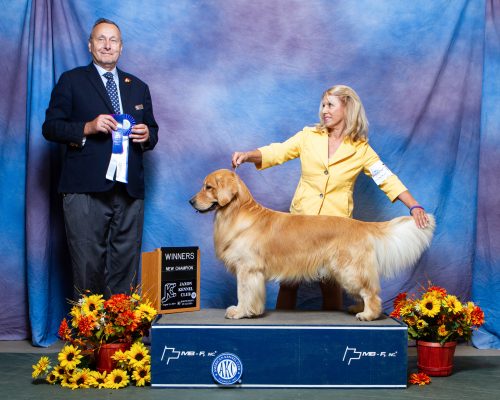 Quinn has won his second major in Kalamazoo!!!!  A 4-point Major Win was awarded to Quinn while he was handled by my very best friend, Laura Fabbro!!!  We couldn’t be more excited!  Quinn needs only one more point and he will have that “American Champion” title in front of his name! 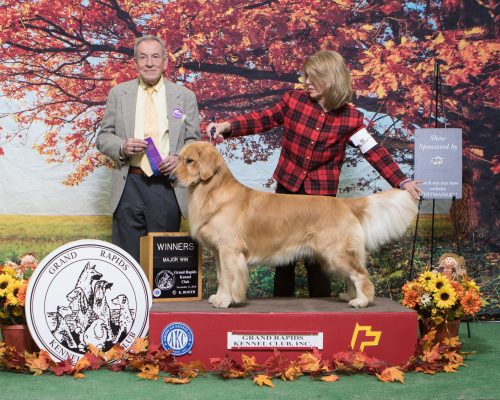 Quinn has begun his show career with a bang!  Amy and Phil Booth are showing Quinn , and started with his first day out with a 3-point MAJOR WIN!!  Hope this is a sign for a GREAT show career!!! 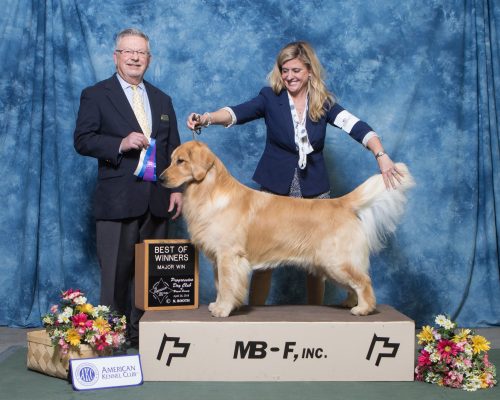 Another fun weekend in Canada over Labor Day!  Roxie won Winners Bitch, Best of Winners, Best of Breed and GROUP ONE!!!!  We had the opportunity to go into Best In Show competition because of her wins, however that Judge had no love for our naked little girl.  But what an honor!  Roxie also won Reserve Winners Bitch almost every time for the remaining shows.  She is only one point away from being a new Canadian Champion!!
Quinn won Best Puppy In Breed, with many Reserve Winners Dog, and also won his very first Winners Dog to get his first point towards his Canadian Championship.
Fun weekend at Sarnia Kennel Club shows!  Our Roxie won Winners Bitch and Best of Opposite 3 times.  She also won Best Puppy once.
Our little boy, Quinn, was entered into the 4-6 month Baby Puppy category.  He strutted into the ring, stacked himself four square, and floated around the ring.  He won Best Baby Puppy In Breed, Best Baby Puppy Group, and Best Baby Puppy In Show!!!!
The next day, Quinn was also entered into the same Baby Puppy category.  He seemed to be a pro!  He did the same thing, and won Best Baby Puppy In Breed, Best Baby Puppy Group, and Best Baby Puppy In Show!!!!
I was thrilled to say the least.  There were some very nice competition that Quinn had to beat.  Quinn had his own little fan club when we walked into Best In Show the second day.  I’m not sure who they were, but they were clapping and woot-wooting for us when we walked into the ring!  I’ve never experienced anything like this before.  Thank you to everyone who supported us!!!
INTRODUCING:
AM CHAMPION, NAT’L/INTERNAT’L CH, U-GRCH
GAZEBO’S MAGICAL BEWITCHING HOUR
Thank you Amy Booth and Blue Rose Team! 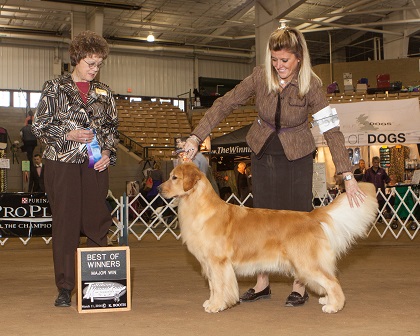 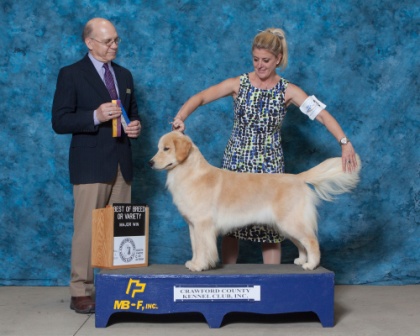 “Jersey”, Gazebo’s Hockey Night @ Gazebo is now known as AM CH, U-CH, IABCA Nat’l, & InterNat’l Ch Gazebo’s Hockey Night @ Gazebo!!!!  I am so very PROUD of this girl.  She finished her AKC Championship in record speed with 3 Best Of Breed wins to add to her resume!  Jersey was expertly shown by Amy Booth and the Blue Rose Team in order to make this achievement happen.  Jersey started her journey with Amy at the tender age of 15 months and finished her Championship at 16 months of age.  We are all so proud of our puppy girl!!
Gazebo’s Hockey Night @ Gazebo was expertly shown for her first weekend out with Amy Booth and won Winners Bitch and Best of Winners on Saturday for her first two AKC points, followed by Winners Bitch, Best of Winners and BEST OF BREED for a 4-Point MAJOR on Sunday!!!
Gazebo’s Magical Bewitching Hour -“Sam”,  was shown at her first dog show at Whitmore Lake at the tender age of 3 months and 10 days old. To our delight, she won Best Puppy In Show!!! 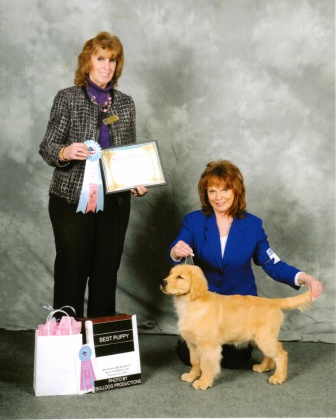 “Sam”
Levi earned his AKC Championship in just 5 short weeks!!  We are very grateful to both Amy & Phil Booth for their expertise in showing Levi.  Phil showed Levi to a Best Of Breed, and Amy finished his Championship on May 24, 2013. Thank you both for making my dream come true!!! 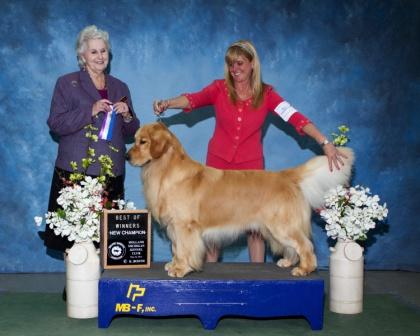 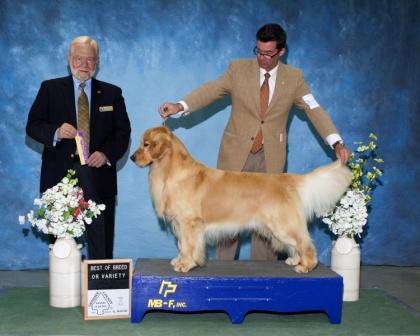 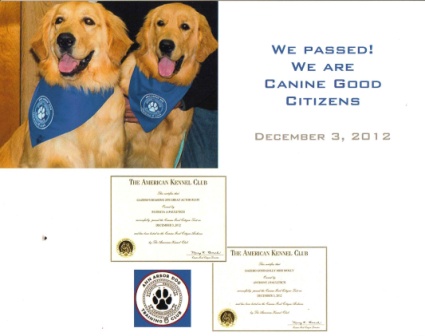 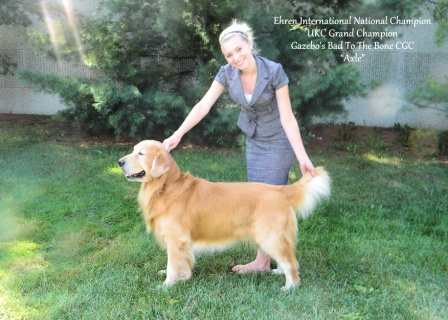 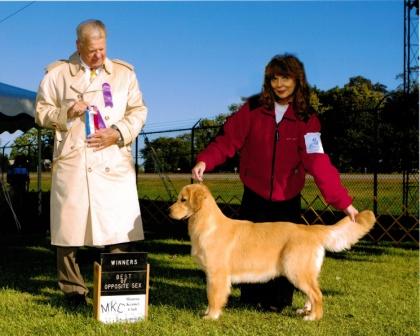 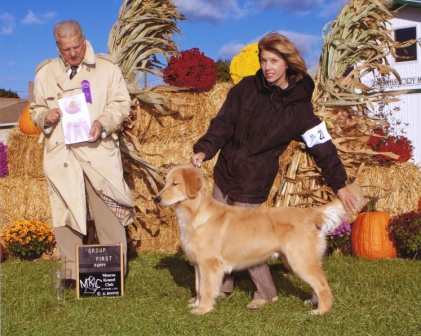 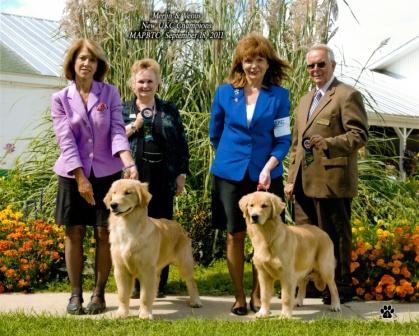 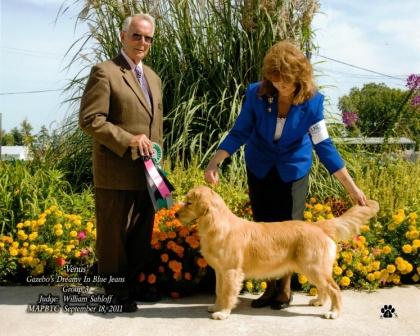 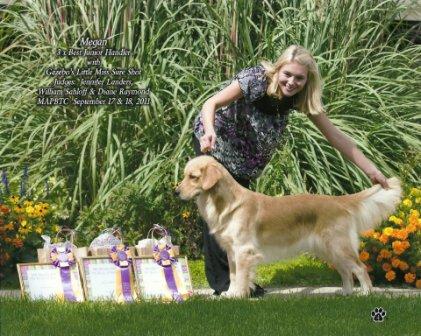 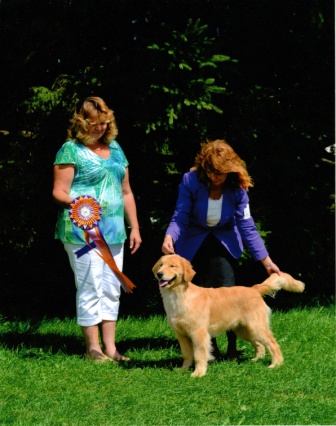 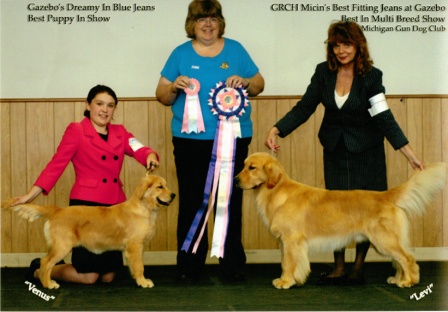 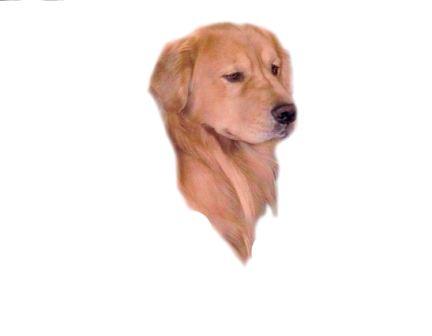 Annie working and winning with a great Junior Handler – Megan 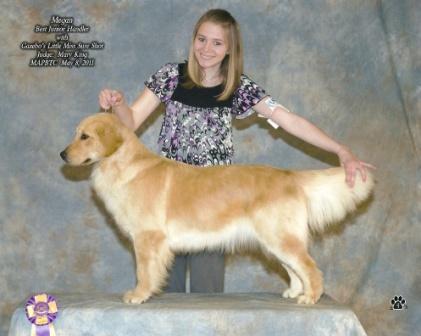 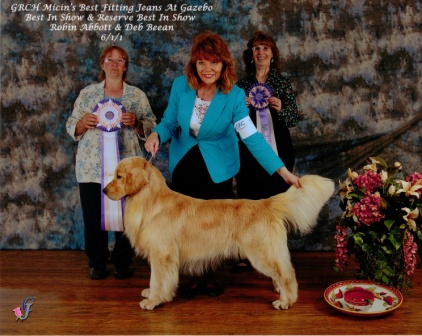 “Annie” – Gazebo’s Little Miss Sure Shot
was awarded Winners Bitch, Best Of Winners, and Best Of Opposite Sex, providing her with her first AKC point at the Genesee Kennel Club Show on Sunday, May 22, 2011, under Judge – Mr Jerry M Watson, and expertly handled by Mike Pickard. 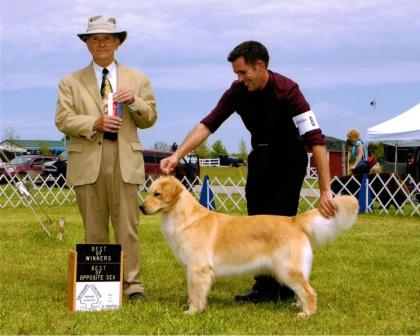 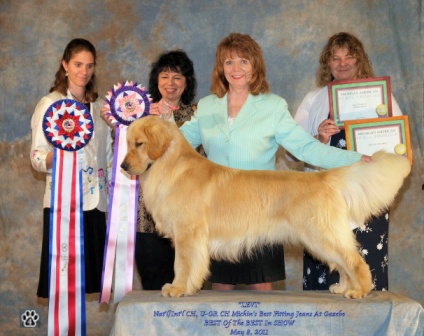 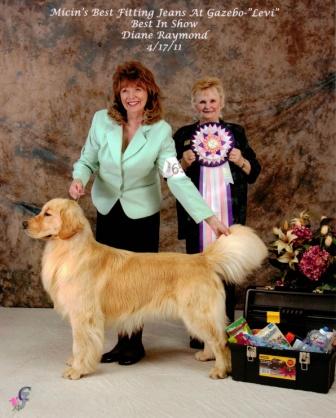 MICIN’S BEST FITTING JEANS AT GAZEBO   “LEVI”
BEST IN MULTI BREED SHOW
Judge – Diane Raymond
04/17/11
Also adding to our wins this weekend, Axle was awarded Group 3.  We are so proud of our “kids”!!! 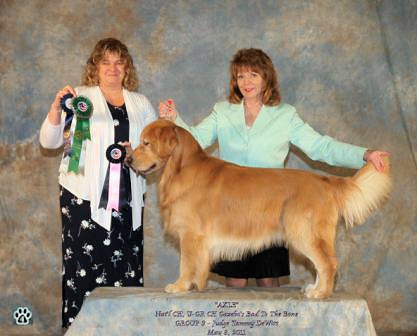 Nat’l CH, U-GR CH GAZEBO’S BAD TO THE BONE  “AXLE”
GROUP 3 – Judge Tammy DeWitt
May 8, 2011
.
Gazebo’s Mountain Mist Of Cloverlook Hill   “Misty”
Misty and her owners, Chuck and Janet, helped Dr Rebecca Babcock celebrate the opening of her new Veterinary Hospital today.  Misty was the “test” dog  – and helped to test all of the new equipment!!!
We want to congratulate Dr Babcock on her new facility – Red Barn Veterinary Hospital – and thank her for all the good work she does!!!!
↑